Hilary Mantel's "Wolf Hall" and the Pleasure of the Literary Feast 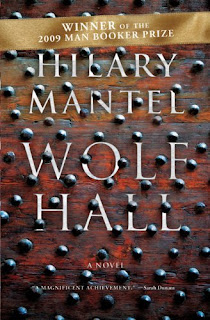 He arrives early at York Place. The baited gulls, penned in the keeping yards, are crying out to their free brothers on the river, who wheel screaming and diving over the palace walls. The Carmen are pushing up from the river goods incoming, and the courts smell of baking bread. Some children are bringing fresh rushes, tied in bundles, and they greet him by name. For their civility, he gives each of them a coin, and they stop to talk. ‘So, you are going to see the evil lady. She has bewitched the king, you know? Do you have a medal or a relic, master, to protect you?’

This passage from Hilary Mantel’s Wolf Hall describes Thomas Cromwell’s arrival for a visit with Anne Boleyn, the woman for whom King Henry VIII has engaged in a venomous battle with Catholic Rome to dissolve his first marriage to Katharine of Aragon. Hoping to consolidate the power of the Tudor dynasty, Henry has become fed up with (what he perceives to be) Katherine’s failure to produce a male heir for him.

But enough with the history lesson, for even though Mantel’s book is impeccably researched, its seductive charm stems entirely from Mantel's gifts as a storyteller.  I’ve never watched The Tudors on TV, and the only interest I’ve ever shown in Henry VIII is tapping my toes to that delightful song by Herman’s Hermits. However, I find it impossible not to be spellbound by Mantel’s writing. Take for example, the opening of Wolf Hall:

‘So now get up.’
Felled, dazed, silent, he has fallen; knocked full length on the cobbles of the yard. His head turns sideways; his eyes are turned towards the gate, as if someone might arrive to help him out. One blow, properly placed, could kill him now.

There is nothing in this passage that suggests the dry bookishness of “historical novel” to me. Instead, Mantel blends vivid description, economical prose, and present-tense syntax to paint her story in the most intimate of colours. There is a graceful depth to her writing that I can only liken to a canvas that’s been layered with paint until it’s developed a palpable thickness. Every word of this book is significant, yet readable.  Mantel does not achieve this effect by piling up 650 pages of historical details, but by filling these pages with only the right details. The result of her effort is nothing less than a living world populated by the most interesting people you’ve ever met. The critic Diana Athill has even confessed that after reading Wolf Hall, she “can’t think of anything since Middlemarch which so convincingly builds a world.” High praise indeed, and every bit of it deserved.

Now as a caveat to all this gushing, I must admit that I did not fully appreciate the genius of this novel for its first 100 pages. I had a lot of difficulty following the story and kept glancing perplexedly back to its cover, wondering how the book had managed to win the 2009 Booker prize. However, my relationship to the book transformed completely when I learned to consult the “Cast of Characters” that Mantel provides in the book’s front matter. After all, Wolf Hall contains a cast of 95 people with speaking roles, which is enough to make the reader feel as though he/she is wandering around a large dinner party and trying to remember everyone’s name. But taxing as this may sound, all you really need to do when reading Wolf Hall is keep your left index finger wedged in the book’s Cast of Characters section for easy reference. This way, you will avoid making the same mistake I did, and will have a much better opportunity to gorge on this book for the feast of prose it truly is.