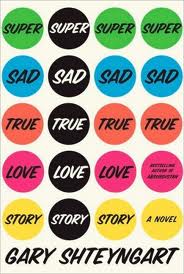 This book tells the story of Leonard “Lenny” Abramov, a middle-aged, middle-class, painfully unexceptional man living in the United States at an unknown (but probably very near) future moment. While working and vacationing in Italy, Lenny falls madly in love with a Korean girl named Eunice Park, who is less than half his age, height, and weight. Lenny worships Eunice as an idol of youth and sensuality. Eunice, on the other hand, tends to use Lenny as, at best, a sounding board for her family-based anxieties, and at worst, an emotional pincushion for her latent sadism.
Did I mention that this book is a comedy? And a dystopian one at that?
In the world of Super Sad True Love Story, The United States has been taken over by the totalitarian “Bipartisan” government, and its economy is on the brink of collapse due to mounting threats from America’s Chinese creditors. In a desperate attempt to keep their sinking economy afloat, the United States makes endless public appeals for the frugal Chinese market to start developing a first-world appetite for consumerism.
Lenny first meets Eunice at one of the “halfhearted orgies” that his Italian friends host on an almost weekly basis.  He is an introvert, a neurotic, and a hopeless romantic whose favorite activities include meditating on architecture and reading books (or “printed, bound media artifacts,” as they are known in the future). Eunice, on the other hand, is a young woman who struggles to see anything worthwhile beyond the horizons of unabashed consumerism. Lenny works in the field of Indefinite Life Extension, which is to say that he provides “High Net Worth Individuals” with the opportunity to live forever through a complex regimen of vitamin intake, organ replacement, and the injection of nanorobots that enter the body at the cellular level and perpetually rebuild the body’s vital components.

The dominant media technology in Shteyngart's future world is a small, i-Podish device known as an äppärät, which is worn around the neck and projects a holographic cloud of statistics around a person’s body. Among the statistics readily visible in this cloud are the individual’s credit rating, monetary holdings, and sexual desirability (based on feedback gathered wirelessly from other people’s äppäräti). The following passage depicts Lenny entering a bar and having his äppärät deliver quantitative and qualitative proof of his unattractiveness to the opposite sex:
“The bar was filling up with Senior Credit guys in tapered chinos and oxfords. I felt superior to them, but my MALE HOTNESS was swiftly falling to last place out of thirty-seven, thirty-eight, thirty-nine, forty males… I turned in Annie’s direction with my left lip crinkled in sadness and my brow heavy with empathy, but the word ‘Look away quickly, dork,’ appeared on my äppärät. ‘Hair transplant time for RAG?’ another girl wrote. (‘Rapidly aging geezer,’ according to my electronic pebble.) ‘I can smell the DO from here.’ (‘Dick odor,’ my äppärät helpfully told me.)…The bar was now utterly aflash with smoky data spilling out of a total of fifty-nine äppäräti.”
For all of the cultural insidiousness it satirizes, however, Super Sad True Love Story is at heart an offbeat romantic comedy of the Woody Allen ilk. Shteyngart’s depiction of Lenny and Eunice’s hilariously tortured relationship suggests none of the authorial self-importance that Aldous Huxley indulges when depicting the relationship of Bernard Marx and Lenina Crowne in Brave New World. In contrast to Shteyngart, Huxley does what a lot of dystopian writers seem to do, which is develop an abstract social critique and then translate it into a novel for the purpose of intellectual dissemination. It is not only Huxley’s Brave New World, but Atwood’s Oryx and Crake, Orwell’s 1984, and even Wells’ The Time Machine that makes you feel as though the author is leaning over your shoulder and hissing into your ear, “PAY ATTENTION! I’m teaching you something important about the modern world.”

Without doubt, Shteyngart’s social satire creates discomfort about the future of America’s cultural and economic health, but his heavily personal exploration of love, neurosis, and sexuality ensures that his characters and plot remain foremost in readers’ minds. In Super Sad True Love Story, romantic comedy encounters the brute didacticism of dystopian fiction and does not back down. It is to this extent that Shteyngart’s book is a wildly compelling and enjoyable read, not to mention a sophisticated manipulation of literary genre. For readers who need to be reminded of how wonderful the comedic novel can be, I strongly recommend this book.
Posted by Phil at 21:43