Junot Díaz's "The Brief Wondrous Life of Oscar Wao": The Pleasure of a Unique Voice (That isn't Used as a Crutch) 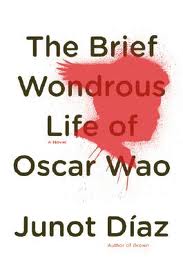 “They say it came first from Africa, carried in the screams of the enslaved; that it was the death bane of the Tainos, uttered just as one world perished and another began; that it was a demon drawn into Creation through the nightmare door that was cracked open in the Antilles. Fukú americanus, or more colloquially, fukú—generally a curse or doom of some kind; specifically the Curse and the Doom of the New World.”

This passage opens The Brief Wondrous Life of Oscar Wao, and it refers to a centuries-spanning curse that has fixed the destiny of this book’s protagonist, Oscar de Leon, a Dominican man-child living with his mother in Paterson, New Jersey. At first, this passage seems to issue from an omniscient narrator, but as the reader later discovers, the narrator of this text is in fact Yunior de Las Casas, a former college roommate of Oscar’s and former boyfriend of Oscar’s sister, Lola. As Yunior tells us, Oscar was once an attractive young boy with multiple girlfriends. But the moment puberty struck him, he swelled into a morbidly obese, acne-encrusted, socially inept nerd:

“Oscar was a social introvert who trembled with fear during gym class and watched nerd British shows like Doctor Who and Blake’s 7, and could tell you the difference between a Veritech fighter and a Zentraedi walker, and he used a lot of huge-sounding nerd words like indefatigable and ubiquitous when talking to n[—]s who would barely graduate from high school […] His adolescent nerdiness vaporizing any iota of a chance he had for young love.”

That said, this book not only tells the story of Oscar de Leon, but also recounts and comments upon the struggles of his mother and grandparents, who lived in the Dominican Republic under the dictator Rafael Trujillo in the 1930s, 40s, and early 50s.

For all of this book's wondrous qualities, it is largely the tone of its first-person narrator, Yunior de Las Casas, that gives this book its magic. Yunior’s constant mixture of formal prose and expletives (both Spanish and English), along with his brute commentary and extensive footnotes, makes for an extremely charismatic and original voice. Further, his sense of humour and latent nerdery lead him to frame his storytelling through constant allusion to comic books, fantasy and science fiction novels, and role-playing games, artifacts of North American culture that take on a new life when filtered through the language of Dominican diaspora.

This incredible voice comes across as a virtuoso performance on Díaz’s part, but when one discovers that the author developed the character of Yunior in numerous short stories published prior to Oscar Wao, one appreciates how much hard work went into the creation of such a charming (albeit sometimes dastardly) narrator. What is perhaps most important about the tone of Oscar Wao is that Díaz does not use it as a crutch to prop up a boring plot and wooden secondary characters (I’m looking at you, Aravind Adiga). The book develops its primary settings of Paterson, New Jersey and the Dominican Republic with strong, meaningful details that Díaz has gathered from first-hand experience. It also branches off from its primary narrator to develop numerous characters with arresting intimacy. Finally, it easily contains enough passion, violence, buried anguish, and laugh-out-loud humour to keep readers riveted from beginning to end. It is for these reasons that I strongly recommend this book, but not half as strongly as the book is able to recommend itself:

“Beli had the inchoate longings of nearly every adolescent escapist, of an entire generation, but I ask you: So fucking what? No amount of wishful thinking was changing the cold hard fact that she was a teenage girl living in the Dominican Republic of Rafael Leónidas Trujillo Molina, the Dictatingest Dictator who ever Dictated. This was a country, a society, that had been designed to be virtually escape-proof. Alcatraz of the Antilles. There weren’t any Houdini holes in that Plátano Curtain.”