Michael Crummey's "Galore": When "Ulysses" and "One Hundred Years of Solitude" Come to Outport Newfoundland 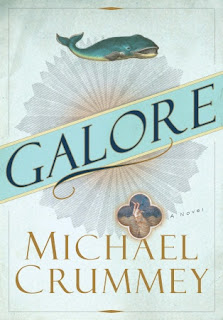 “On the eve of the Feast of the Epiphany he fell in with a group of mummers that included Horse Chops, a man covered in a blanket, a wooden horse’s head on a stick before him. The eyes were painted at either side of the head, one black and one blue, the jaws of the horse driven through with nails for teeth and tied with leather strings so they snocked together. At every stop a mummer wearing a crown of spruce boughs chose one member of the household as a victim, asking Horse Chops the most embarrassing questions he could dream up. No subject was too lewd or personal, no question was taboo. Secret loves and affairs, unpaid debts, illegitimate children, ongoing family arguments, sins buried and unconfessed, all were fair game.”

Before I go any further, I’d just like to say one thing: Michael Crummey’s Galore is my all-time favourite novel. Whatever the hell is in second place is not close.

With that said, Galore unfolds in the fictional Newfoundland outport of Paradise Deep, a place so isolated from the rest of the world that readers cannot even tell what century the book is set in until its first hundred pages have passed. The story opens with a depiction of Paradise Deep’s inhabitants rushing from their homes with knives and axes to hack whatever meat they can from a whale that has beached itself. When they slice the leviathan open, however, the stinking, pale body of a man falls onto the wet sand. Young Mary Tryphena watches as her grandmother disobeys the town’s richest man, King-Me Sellers (named so because no one is permitted to beat him at checkers), and orders the townspeople to give the body a proper burial. Before they can move the body, however, the man miraculously recovers consciousness. He cannot speak a word, and he is permeated by a fishy stench that does not leave him for the rest of his life. But his appearance in Paradise Deep sparks a massive chain of events that includes an exorcism by a defrocked priest, the casting of a family curse, and a visit from a mountebank politician with a damning secret.

With Galore, Crummey has given Newfoundland the kind of novel it truly deserves. He creates a world defined by the cross-pollination of Christian dogma, pagan superstition, and local legend. His use of the magic realist genre allows Galore to shoulder the full weight of Newfoundland's folk traditions while weaving these traditions into the fabric of its characters’ daily lives, much like Gabriel Garcia Màrquez’s One Hundred Years of Solitude (minus the Newfoundland part). In this text, there is no discernible distinction between characters, setting, plot, and dialogue. The setting is a character in itself, and countless characters form part of the setting. The plot feels as though it could not have taken place anywhere else in the world, and it is with this accomplishment in mind that the Globe and Mail’s Steven Galloway has noted that Galore strikes the reader as a “folkloric sum of Newfoundland.” The novel’s prose is so musical and tactile that it can rival James Joyce’s Ulysses at times, particularly when it indulges Crummey’s oral fascination with the ever-sensual sea:

“They’d scaled the whale’s back to drive a stake with a maul, hoping to strike some vital organ, and managed to set it bleeding steadily. They saw nothing for it then but to wait for God to do His work and they sat with their splitting knives and fish prongs, with their dip nets and axes and saws and barrels. The wind was razor sharp and Mary Typhena lost all feeling in her hands and feet and her little arse went dunch on the sand while the whale expired in imperceptible increments. Jabez Trim waded out at intervals to prod at the fat saucer of an eye and report back on God’s progress.”

In addition to the interweaving of myth and reality, it is Crummey’s use of sex scenes that makes his book such a compelling read. His writing reminds us that when it comes to eroticism, literature still offers something that other media like television and cinema just can’t reproduce. In comparison, there is still something private and deliciously clandestine about reading. There are scenes in Galore that could fog up your bathroom mirror, but you could read them in a coffee shop and no one would be the wiser. The mental image that you draw from the written words is for you alone. To this extent, I believe that well-written eroticism is good for literature as a whole, and I am proud to say that Michael Crummey (and many other Canadian writers, for that matter) can write it as well as anyone else in the world.

Before I close, I will add one disclaimer: as with Wolf Hall, it is important to keep one of your fingers wedged in the front matter when reading Galore, particularly the family tree that Crummey provides. Characters you meet at the opening of this book will be dead for a hundred years by the time you turn the last page, and it is very easy to become lost without consulting the family tree. It might take a little bit of work, but Galore is well worth it. If you truly love where you come from, and wish to write a novel that can do justice to that love, Galore is a beautiful model to emulate. It is a book that deserves not only to be read, but to be remembered for a very, very long time.
Posted by Phil at 17:13