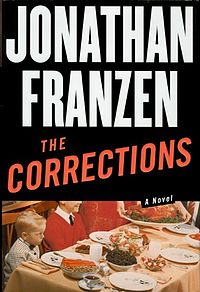 The Corrections tells the story of the Lamberts, a traditional Midwestern family led by a patriarchal railway engineer named Alfred and his neurotic wife, Enid. Their children, Chip, Gary, and Denise, have all moved to the East Coast in order to escape the constraints of their traditional Protestant upbringing. When Alfred suffers a rapid decline from Parkinson’s Disease, however, Enid begs her three children to return home for what she knows will be their last Christmas together.

On his or her own, any one of the Lambert children provides enough fodder to support an entire book. Chip is a Marxist academic who ruins his life by having an affair with one of his students. Once fired from his tenure-track job, he spirals into a deep depression and ultimately finds himself working for a Lithuanian crime boss defrauding American investors. Denise is a type-A chef living in Philadelphia who, in addition to being the lover of her business partner’s wife, is a latent sadist. Gary, the eldest son, is a successful but depressed and alcoholic banker whose marriage to an emotional manipulator named Caroline is nothing short of a penectomy occurring in slow motion.

I mentioned in an earlier post that Zadie Smith’s White Teeth offers an excellent example of the pleasure of being told rather than shown, and this pleasure is something you also get from the work of Jonathan Franzen. Like Smith, Franzen unabashedly breaks the golden rule of “show; don’t tell” by filling the majority of his pages with lengthy (and often, purely expository) accounts of characters. Just look at the following passage, which begins one of the latter sections of The Corrections:

“Robin Passafro was a Philadelphian from a family of troublemakers and true believers. Robin’s grandfather and her uncles Jimmy and Johnny were all unreconstructed Teamsters; the grandfather, Fazio, had served under the Teamsters boss Frank Fitzsimmons as a national vice president and had run the biggest Philly local and mishandled the dues of its 3,200 members for twenty years. Fazio had survived two racketeering indictments, a coronary, a laryngectomy, and nine months of chemotherapy before retiring to Sea Isle City on the Jersey coast, where he still hobbled out onto a pier every morning and baited his crab traps with raw chicken.”

Following this paragraph, we never again hear about Fazio, Frank Fitzsimmons, or Jimmy and Johnny. In this passage, Franzen wants to introduce us to Robin Passafro, and does so with several pages’ worth of what you just read. Most writing instructors would fill Franzen’s pages with red pen, writing the phrase “too much exposition” all over them, and would do so for one very clear reason: Franzen’s skill cannot be taught. Like Zadie Smith, Hilary Mantel, or Alice Munro (of whom Franzen is an enormous fan), Franzen can tell you a thousand facts about a single character without ever becoming repetitive or indexical (in other words, reciting a laundry list of details that don’t seem to cohere into a realistic person). And it’s because of this skill that the four authors I just mentioned can instantly identify themselves as superior writers of fiction.

Franzen can be (and has been) criticized for failing to give discernible thematic unity to his novels. This is largely because he does not work in terms of theme, defined as “a unifying or dominant idea.” He rather works through motif, meaning “a subject elaborated upon through recurrence.” The titular subject of The Corrections, for example, lies far more within the realm of motif than theme. In this novel, "the corrections” refers to the economic “corrections” that swept through America following the dreamlike financial boom of the late-90s. It also refers to the neurological corrections that an experimental therapy called Correktall is supposed to give to Alfred Lambert’s damaged brain. Further still, The Corrections can refer to the corrections that a younger Alfred thinks he must constantly enforce in order to raise obedient children. Like the details that bring Franzen’s characters to life, these diverse meanings of the “corrections” motif never fully come together. What gives Franzen’s book such an incredible force is the way it seems as though things are always about to come together. It is in this way that Franzen seduces our desire, and we are more than happy to be seduced.

Finally, Franzen’s ability to dance between satire and sympathy shows a mastery of tone that is profoundly enjoyable. For much of the text, he is satirical in his depiction of how family dysfunction is transmitted and entrenched across generations. Yet every so often, he will light upon a character like a butterfly resting on a blade of grass, showing a sympathy so fragile and fleeting that it seems like a miracle of human experience. Take for example the following passage, in which Enid discovers that her deteriorating husband has defecated in his bed during the night:

“Life as she knew it ended with her squeeze through the half-open door. Diurnality yielded to a raw continuum of hours. She found Alfred naked with his back to the door on a layer of bedsheets spread on sections of morning paper from St. Jude. Pants and a sport coat and a tie were laid out on his bed, which he’d stripped to the mattress. The excess bedding he’d piled onto the other bed. He continued to call her name ever after she’d turned on a light and occupied his field of vision. Her immediate aim was to quiet him and get some pajamas on him, but this took time, for he was terribly agitated and not finishing his sentences, not even making his verbs and nouns agree in number and person… Even now she couldn’t stop loving him.”

I can almost promise that by the time you finish this book, you will no longer think of the Lamberts as fictional characters. As a younger and theme-oriented reader, I never would have suspected that I could love a book that was so patently realist and so much more interested in people than in concepts. But Franzen got to me, and he allowed me to change the terms in which I think about very important things like family and friends. To give an example: I used to shake my father’s hand after we’d gone a long time without seeing one another. Since reading The Corrections, I hug him.