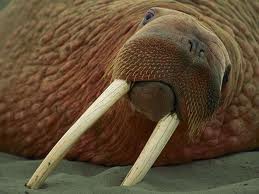 Walrus lay upon the pebbly beach, a flipper across his eyes and a ho-hum in his throat.  Lolling his bullhead, he dragged one of his tusks across a razor of rock. The vibrations traveled up into his skull and rattled behind his eyes, giving him a headache. So he stopped. Glancing inland, he settled on a cottage that rested just beyond the border of beach grass. The people living there would probably come down to the shore today for a nice little expedition with their child. The breeze was stiffening, that was true. But they would probably come. The tide lapped at his groin, reaching for the rest of him, trying to cradle his body back into the ocean. Snuffling, he felt a few pearls of seawater in his moustache and licked at them. They tasted of salt and snot, which was not a surprise because he had been sneezing a lot lately. Back out over the water, seabirds jabbered at one another. How did they always have something to talk about, Walrus wondered, without ever seeming to grow tired of one another? He tried a few other things to pass the time, but all of these doings gave him a headache in the end, and he soon grew suspicious of whether he was, in fact, trying to hurt himself.
“Why, hello to you!” somebody squawked. Curious, Walrus rocked his body back and forth, back and forth until he finally threw his head to a place where he could see a little seabird hopping next to him. This was strange because the seabirds did not usually talk to Walrus, except to make fun of him. Yes, something was fishy. The bird’s friends must have been watching from nearby, stifling their laughter and gloriously pushing one another into the grass. Walrus closed his eyes and became as silent as he could. I am only a stone, he told himself.

“You are not very fun or nice,” said the bird. “I know that you are awake, and you must know that you are being rude. You must know that, so then it’s your fault. You've decided not to say anything.”
Walrus answered that he was very tired, snuffling again and exaggerating his floppy jowls so that they spread out over the beach stones. But the bird wanted to know what had made him so tired, and Walrus answered as honestly as he could—“Doing nothing and thinking everything.” The bird cocked her head to one side and hopped a few feet closer.
“Then why don’t you do something?”
“I already told you that I am too tired.”
The bird thought about this for a few moments, glancing down at the stones, then back to Walrus, out to sea, toward the land, back to the stones, then again at Walrus. Finally, she admitted that his problem was very difficult indeed. “Maybe you need something to start you up again," she said. "Something from outside that will get you going.”
Walrus opened his eyes. “Yes. I have been trying that today, looking around for something.”
“Has it worked?”
“I am afraid not.”
“Then maybe this is your fault. Maybe you want to feel the way you do.”
Walrus bristled at the suggestion and did not answer it right away. After he had thought about it, though, he replied that his situation was unpleasant, and that no one could ever want to feel the way he did. Seabird argued that maybe someone would if they enjoyed pain, and Walrus grew frustrated. He was not as quick as Seabird was, and the speed of her conclusions made it difficult for him to reply. But he was certain that this feeling inside him was his and not hers, and that she did not have the right to force any thoughts on him because she did not feel what he did. He told her this.

“I am trying to help, and have not forced anything,” Seabird answered. “If you want me to go away, then say so.” Walrus wanted her to stay, but did not tell her this. “Maybe you are too fat,” she added. He argued that he was supposed to be fat. “That fat?” she asked, pecking at his wrinkled skin. He told her that there had been times in the past when he was much fatter, and yet he had never felt this way before.