Lately, I've been having these weird visions while I'm falling asleep at night. In these visions, I imagine myself walking down a spiral staircase, being led by a floating blue flame, and coming to the threshold of the kingdom of the dead. For me, this vision is a metaphor for what really great literature accomplishes: it seduces you down its serpentine corridors, and brings you to the very edge of your own non-being, to the brink of that dark kingdom where all of the people you love will one day vanish. And, of course, where you too will vanish.

It turns out that I've been getting this image from a poem by D.H Lawrence that I read a long time ago. When I was young, I assumed the poem was just about flowers; but only recently have I begun to see it as a metaphor for literature and the reading process in general. In any case, that's as far as my fragmented thinking on the subject has taken me at this point. I really hope you enjoy this poem.

As an added note, you might notice that in this poem, Lawrence forms a very deep association between our approach to the limits of experience and the image of the god Pluto "ravishing" the young and beautiful Persephone. I would like to think that we can salvage the beautiful aspects of this poem while still recognizing the ethical dubiousness of Lawrence's gender politics, which are very heavily based on the insane male libido that he's so well known for writing about. If you want an incredible analysis of gender in Lawrence's writing, start with Simone de Beauvoir's "D.H. Lawrence and the Phallic Imagination," found in "The Second Sex." With her seamless logic and conversational tone, de Beauvoir breaks down Lawrence's views of men and women in a way that is both compelling and (because of de Beauvoir's impeccable style) very enjoyable to read. I was really hoping to provide a link to this piece here, but I'm having trouble finding it online. 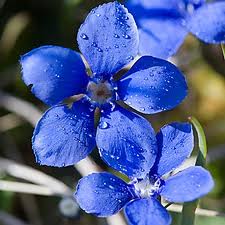 Not every man has gentians in his house
in Soft September, at slow, Sad Michaelmas.
Bavarian gentians, big and dark, only dark
darkening the daytime torchlike with the smoking blueness of Pluto's
gloom,
ribbed and torchlike, with their blaze of darkness spread blue
down flattening into points, flattened under the sweep of white day
torch-flower of the blue-smoking darkness, Pluto's dark-blue daze,
black lamps from the halls of Dis, burning dark blue,
giving off darkness, blue darkness, as Demeter's pale lamps give off
light,
lead me then, lead me the way.
Reach me a gentian, give me a torch!
Let me guide myself with the blue, forked torch of a flower
down the darker and darker stairs, where blue is darkened on blueness
down the way Persephone goes, just now, in first-frosted September
to the sightless realm where darkness is married to dark
and Persephone herself is but a voice, as a bride
a gloom invisible enfolded in the deeper dark
of the arms of Pluto as he ravishes her once again and pierces her once more with his passion of the utter dark among the splendour of black-blue torches, shedding fathomless darkness on the nuptials.

Bavarian gentians, tall and dark, but dark
darkening the daytime torch-like with the smoking blueness of Pluto's gloom,
ribbed hellish flowers erect, with their blaze of darkness spread blue,
blown flat into points, by the heavy white draught of the day.