Elaine Benes, Homerpalooza, and the Modern Evolution of the Exclamation Point 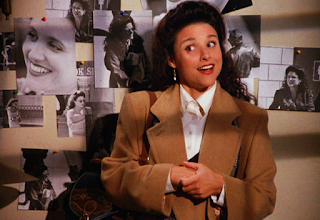 It's been twenty years since Elaine Benes fought with her boyfriend and got into hot water with her boss over the proper use of an exclamation point on NBC's Seinfeld. At the time, Elaine was worried that her boyfriend (and perhaps American culture in general) was too hesitant to show genuine enthusiasm, be it either written or spoken. And for those who remember the irony-loving, endlessly sarcastic early-to-mid nineties, she might have had a point. Fans of the landmark television show The Simpsons will no doubt remember this classic exchange between two apathetic Gen Xers in the episode titled Homerpalooza.

The episode aired in 1996, and many cultural observers could say that it sounded the death knell for the nineties' obsession with sarcasm. Mind you, the late nineties would continue to beat this dead horse for some time. But keen viewers could already identify with teen #2's question. By 1995, the widespread use of sarcasm had created a social sphere for youth in which genuine feeling couldn't be expressed without being met with sharp suspicion (or at least a confused grimace). Irony had established itself as the norm to such an extent that speaking genuinely and directly to a person (i.e. through a compliment) would require follow-up, explicit assurance that you were not being sarcastic.

By the time the new millennium rolled around, sarcasm was still a staple of pop culture. In the 2001 film Ghost World, for example, the main character Enid (played by Thora Birch) responds to a high school acquaintance's idea of hanging out some time with the line: "Yeah. That'll happen." The remark contains all the cutting irony of the mid 90s. But by 2001, the effect of this line had already become tinged with sadness. As the movie continues, we learn that Enid's sarcastic distance from the world of genuine expression alienates her from people and contributes to her malaise. She comes across as a female version of Holden Caulfield, endlessly criticizing the world for being full of phonies, then turning around and complaining of loneliness in the same breath.

Today, a quick scan of Facebook profiles, Tweets, and mobile phone messages will reveal an explosion of exclamation points. The importance of this evolution in punctuation should not be underestimated. It does not mean that all young people have suddenly started taking Prozac (the last major rise in the use of antidepressants, ironically, came around 1993). Rather, it is a clear historical effort (maybe an unconscious one, in many cases) to distance oneself from the age of sarcasm-as-norm and to usher in a world of neo-sincerity.

It might seem strange to suggest that sincerity was something the mid-2000s needed to rediscover through the repurposing of a punctuation mark. But if you were to draw up a list of the ten biggest ways in which new communications technologies have influenced the emotions of today's youth, you would be wise to include the changing role of the exclamation point.