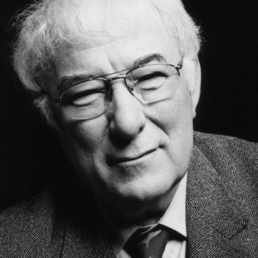 On August 30, 2013, the world lost a man who was arguably the greatest living poet of the English language. Seamus Heaney was 74 years old, and he had won nearly every major English poetry prize in existence, including the T.S. Eliot Prize (2006), The Nobel Prize in Literature (1995), and the E.M. Forster Award (1975). By critics and popular readers alike, Heaney is recognized today as the greatest Irish poet since W.B. Yeats, and there are even many (like myself) who consider his work better than Yeats’. During his remarkable life, Heaney’s words impacted the cultural landscape of Ireland in a way that hearkens back to medieval times, when the country was governed by priests and poets. Yet beneath the hype and poorly concealed envy that followed Heaney throughout his life, his poetry retained a much more elemental significance.

When I was younger, Seamus Heaney was always that one writer in all of the English literature and poetry anthologies whose date of birth was not followed by a date of death. This was of course a cause of great wonder and jealousy for me and for any school-aged writer with ambitions of one day making it into the literary canon – while still being alive to enjoy it. So far, however, everything I’ve written about Heaney strikes me as cold and informational. To truly do justice to what his words meant to me, I can only reproduce his poem “Digging,” which remains for me one of the most perfect poems I’ve ever read…

Between my finger and my thumb
The squat pen rests; snug as a gun.

Under my window, a clean rasping sound
When the spade sinks into gravelly ground:
My father, digging. I look down

Till his straining rump among the flowerbeds
Bends low, comes up twenty years away
Stooping in rhythm through potato drills
Where he was digging.

The coarse boot nestled on the lug, the shaft
Against the inside knee was levered firmly.
He rooted out tall tops, buried the bright edge deep
To scatter new potatoes that we picked,
Loving their cool hardness in our hands.

By God, the old man could handle a spade.
Just like his old man.

My grandfather cut more turf in a day
Than any other man on Toner’s bog.
Once I carried him milk in a bottle
Corked sloppily with paper. He straightened up
To drink it, then fell to right away
Nicking and slicing neatly, heaving sods
Over his shoulder, going down and down
For the good turf. Digging.

The cold smell of potato mould, the squelch and slap
Of soggy peat, the curt cuts of an edge
Through living roots awaken in my head.
But I’ve no spade to follow men like them.

Between my finger and my thumb
The squat pen rests.
I’ll dig with it.

In addition to being one of my favorite poems, “Digging” is also one of the best examples I’ve ever seen of Ezra Pound’s famous statement that, “Poetry must be as well-written as prose.” Seamus Heaney’s poetry is quite prosaic in its own right. The man does not create any music that is not already an organic part of his descriptive diction. Whereas many poets would use verbal pyrotechnics to convince the reader of their literary worth, there is a modesty and practical wisdom to Heaney’s language that is both inspiring and bittersweet.  And for the poetry nerds out there, I’d also like to point out how much I think Heaney’s simple use of spondee makes this poem such an excellent piece. Phrases like “squat pen,” “coarse boot,” and “good turf” help give a stolid rhythm and structure to the piece, thus allowing the rest of the somewhat prosaic phrasing to let its inner music express itself by virtue of its contrast with each of these spondees. Simply put, if one were going to teach a class on how to write engaging, accessible poetry, I would start with “Digging.”

Tomorrow, Seamus Heaney will be buried in his home village of Bellaghy. It is impossible to know where Heaney is now; but what we do know is that it’s time for a new generation of poets to grab their pens and start digging.