A "Things Fall Apart" for Canada: Joseph Boyden's "The Orenda" 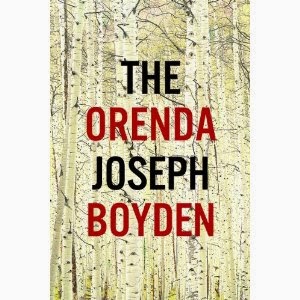 When I finished reading Joseph Boyden’s new novel, The Orenda, I immediately felt that the book  was not only a fantastic read, but also an important contribution to Canadian literature as a whole. Set in 17th-Century Upper Canada, The Orenda follows the first-person narratives of three characters: a French Jesuit priest named Père Christophe, a Wendat (Huron) warrior named Bird, and a young Haudosanee (Iroquois) girl named Snow Falls. Seeking revenge for the death of his wife and children, Bird opens the novel by murdering a group of Haudosanee and forcefully taking one of their daughters, Snow Falls, to be his own child. At first, he rationalizes his actions by thinking this adoption might eventually end the cycle of violence between his people and the Haudosanee. But ultimately, his unwillingness to return Snow Falls to her people leads to all-out war between the two groups. Meanwhile, a missionary named Père Christophe comes to live in Bird’s village in an effort to “civilize” the Wendat by converting them to Christianity.

The premise of Boyden’s novel is one that, in the hands of a less skillful writer, could have gone terribly wrong. To write about early contact between Canada’s indigenous peoples and European explorers is a complicated task. But as I trekked through The Orenda, I was repeatedly impressed by how well Boyden was able to depict Canada’s aboriginal peoples in an empathetic, yet utterly unromantic way (there’s no hint of Last of the Mohicans or Dances with Wolves in this book). The characters were likeable and three-dimensional, yet also capable of horrific brutality. As I read on, I eventually concluded that Boyden’s success in this regard emulated that of another classic story of early contact between European colonizers and an indigenous population, Chinua Achebe’s Things Falls Apart.

One of the most widely celebrated novels of all time, Things Fall Apart takes place in the region of Africa that is today known as Nigeria. That said, I by no means wish to conflate the distinct histories of Canadian and Nigerian colonization. I make my comparison between The Orenda and Things Fall Apart based on the tonal balance that Boyden (like Achebe) strikes between brutality and beauty, depicting both Canada’s indigenous peoples and its white colonizers in a manner that manages to be both poetic and starkly unsentimental at the same time. Like Things Fall Apart, The Orenda centres on a time when the balance of power in North America still swayed in favour of Canada’s indigenous peoples. Yet as I have mentioned, Boyden never waxes nostalgic about pre-contact life. Instead, he describes – nay, dwells on – some of its most brutal aspects, while always being sure to remind the reader that a similar brutality exists in other cultures, as we find when Père Christophe compares the torture practices of the indigenous peoples to those of the Spanish Inquisition.

One aspect of the book that left me scratching my head, however, was the monologue (spoken by the pronoun “we”) that opened each section of the book. The “we” that speaks this monologue seems to be the collective ancestral voice of Canada’s indigenous peoples (although I’m certain that an informed scholar of Aboriginal culture and literature would point out that the identity of this “we” is very unclear). While reading through this monologue, I was especially intrigued by the following passage:

“The world must change, though. This is no secret. Things cannot stay the same for long” (153).

I could not help but compare the content and rhythm of this passage with the following lines from W.B. Yeats' “The Second Coming,” which provide the basis for the title of Achebe’s Things Fall Apart.

Only a few lines lower than Boyden’s statement about the world needing to change, I found the following provocative passage:

“It’s unfair, though, to blame only the [white people], yes? It’s our obligation to accept our responsibility in the whole affair” (153).

In this section and in several others, Joseph Boyden speaks of the necessity for Aboriginal peoples to acknowledge the extent to which their ancestors might have been responsible for (and even complicit in) certain aspects of Canada’s colonization by white Europeans. I am not the first person to single out this passage for further discussion, as the Globe and Mail’s Jared Bland asked Boyden to comment on it in a recent interview. When Bland asked Boyden expand on this passage (and others like it), Boyden responded:

“I carefully put that there, because I don’t want to present First Nations as always being victimized. No one’s purely the victim. Actually, I shouldn’t say that. My wife was purely a victim when she was horribly raped and left for dead. But when it comes to big cultural movements, the Huron played a role in their demise, and they know that. The English and the French and Dutch all did, too. Just the acceptance of responsibility is really important.”

Boyden’s mention of his wife’s rape demonstrates the importance of acknowledging the horrific (yet often invisible) ways that colonial power continues to be played out through present-day acts of violence against women. Once he makes the (potentially dubious) distinction between this type of violence and that of “big cultural movements,” Boyden returns to his initial point about not wanting to portray First Nations peoples purely as victims. However, while The Orenda speaks to the general responsibility that First Nations peoples had (or still have) for colonial violence, the book remains fairly vague about what specific aspects of colonial violence the First Nations people were (or still are) responsible for. If we look to the plot of The Orenda for an answer, the text seems to imply two main areas in which First Nations people bear responsibility for European colonization: 1) the brutal intertribal conflicts that allowed Europeans to play one aboriginal group against another, and 2) the inability of indigenous peoples to truly understand the world-destroying potential of the Europeans’ early presence. After all, the book suggests, how could Canada’s aboriginal peoples haven taken the Europeans seriously when the latter were utterly incapable of surviving in the harsh North American climate without help?

This last question ultimately leads to my one major quibble with The Orenda: the story’s fatalistic tendency to speak about European dominance as an inevitable outcome of North American history. The book might not state this point explicitly, but there are hints of profound stoicism throughout Boyden’s descriptions of the decimation of Canada’s aboriginal peoples, as we find in the prophetic visions of a character named Gosling who can foresee the horrors that await Canada's aboriginal peoples.  It is hard to tell if this determinism is a meta-commentary coming from Boyden’s narrator – the aboriginal “we” that has already seen how history is going to play out – or if it is an unfortunate suggestion that Canada’s colonial history could not have played out any other way than it did. Wars were fought over Canadian land, treaties were signed (or not signed), and it took centuries for complex political processes to manipulate Canada’s ethnic landscape into what it is today. But I felt that this knowledge was sometimes lost in this book’s stoic, ethereal tone.

For all of that, I have little doubt that The Orenda will become a staple in the study of Canadian literature for future generations. It walks the kinds of ethical and narrative tightropes that are sure to stimulate endless discussion. On top of that, the book is also an incredibly well-crafted and compelling read.
Posted by Phil at 20:07 2 comments: