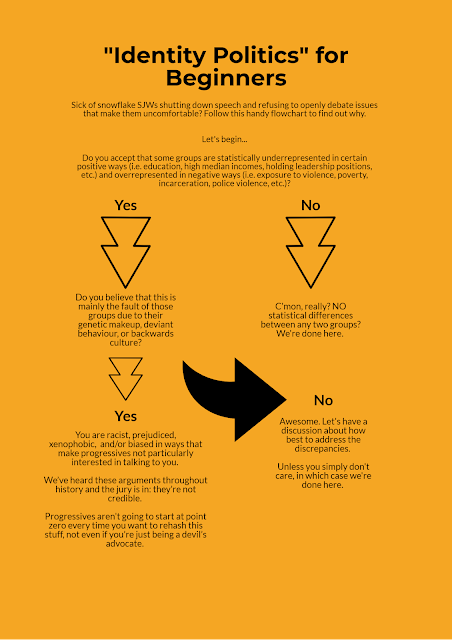 Free speech advocates will often accuse so-called Social Justice Warriors of shutting down speech with nothing more than a claim to victimhood, as though the marginalization of specific groups were based solely on a person’s squishy feeling of being victimized and not a matter of historical record (which it is. Anti-Jewish state propaganda exists. Laws banning women from voting exist. Look ‘em up). The next claim is that while such laws might have once existed, we’ve cleared them all away and now we’re all on an equal footing (let the moral hand-dusting begin). How these people would explain the overrepresentation of African Americans and Indigenous peoples in the prison system, or the high likelihood of assault being committed on members of the LGQTQ++ community remains a mystery to me if group-based marginalization doesn’t exist.

If these free speech advocates want us to be super specific about which speech SJWs want to shut down and which speech they don’t, they need to be equally rigorous about the flip side of the equation: what does and does not constitute a violation of a person’s freedom of speech? When we ask this question, we see just as much hand-waving by free speech “victims” as they accuse SJWs of engaging in.

So let’s start off with a baseline for a violation of a person’s freedom of speech.

Case #1: When the government threatens to legally prosecute, intimidate, or disappear someone based on something they’ve said.

That’s it. Seriously. That’s it.

The Antifa groups that sometimes engage in violence such as Nazi punching?

When a university denies someone the right to speak on campus?

Newp. Not a violation of their freedom of speech. This is a matter of campus policy. Different campuses have different policies about who can come onto their campus and speak, and they can change these rules any time they want. There may be some argument here based on the fact that these are publicly funded institutions, but the fact remains that policies about who can and can’t come speak on campus are different at different schools.

When I start screaming at someone to shut up and drown them out?

No, this doesn’t constitute a violation of that person’s freedom of speech. If it did, the free speech advocate would have to admit that speech in itself is capable of violating another person’s rights. That means speech is a form of violence, and the entire divide between speech and violence that free speech advocates rely on would come crashing down.

The screaming example raises another important point, and it’s one I repeat to myself whenever people start talking about their free speech being violated.

In recent conversations on the internet (and they have been actual productive conversations), I’ve engaged free speech advocates about the idea of internet “mobbing” of those who express unpopular views, be it on the right or left. One claim to victimhood that is constantly made by free speech advocates is that when more than a few people (let’s say more than five) gang up on someone to call them a Nazi or some other epithet, this somehow constitutes a violation of that person’s speech. To these people, being a person who bravely presents a dissenting view to a group orthodoxy somehow constitutes a more authentic act of speech than those who just so happen to share a common reprisal. We can talk all we want about the necessity of maintaining civil discourse and a rational exchange of ideas, but this doesn’t come close to violating that person’s freedom of speech. If Twitter (a private company) bans that person or the people who come after them, it doesn’t violate anyone’s freedom of speech.