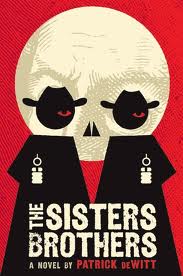 Now the water was boiled and he poured us each a cup of coffee, the taste of which was so poor it actually startled me, and it took my every bit of politeness not to spit the liquid out. Dredging my finger along the bottom of the cup, I brought up a mound of grit. I smelled and then licked this and identified it as dirt… my cup held earth and hot water, nothing more. I believe the man, through some lonely prospector mania, had begun brewing dirt and tricking himself into believing it was coffee. I had a mind to broach the subject with him but he was so pleased to be sharing, and I did not want to upset his pride.

In The Sisters Brothers, Patrick DeWitt tells the story of Eli and Charlie Sisters, two infamous assassins who have received orders to travel to San Francisco and murder an elusive and crafty prospector named Herman Kermit Warm. From the outset, the book contains numerous elements that invite comparison to Harold Pinter’s play, "The Dumb Waiter," or Martin McDonagh’s film, In Bruges. Despite the fact that the book is set in the Wild West of the 1850s, the two titular outlaws speak in dialogue so unbelievably formal that it borders upon a theatre of the absurd. In an additional parallel to the two other mentioned works, the brothers receive their orders from a mysterious, seemingly omnipotent figure known as The Commodore. This phantom presence communicates only with elder brother Charlie, leaving the younger and more portly Eli (the book’s narrator) constantly feeling like he’s out of the loop. The Pinteresque tone of this story is perhaps best exemplified in the following snippet of dialogue, in which Eli learns (from Charlie) that instead of the usual 50/50 split, Charlie has been appointed “lead man” for their next assignment:

As we find in this passage, DeWitt always keeps his narrative fat-free. There are few if any unnecessary words, and when he establishes an exchange of dialogue between Eli and Charlie, DeWitt simply pushes the pendulum once and steps away, letting the back-and-forth movement of dialogue occur naturally rather than trying to intervene with an annoying succession of “he said”s and “he uttered”s. [Shudder].

Throughout this text, DeWitt’s strongest asset is his mastery of the tone, not only through the strangely stilted dialogue, but through his deadpan humour and casual treatment of psychopathy. You know that you should feel more horrified by this book’s countless scenes of violence, but you don’t. Instead, you laugh when Charlie and Eli rob a dentist at knife-point because they have discovered that Novocain will allow them to take a punch to the face without feeling pain (something of great potential value for two men who regularly engage in saloon fights). Amidst the cold formality of the book’s dialogue and blunt depiction of violence, however, there is something more at work than your garden variety dark humour. Human suffering is treated as though it were not a cold fact, but something not quite real, with a tone of sympathetic agnosticism that can be even more disquieting than the grave chaos embodied by a figure like Cormac McCarthy’s Anton Sigur.

Apart from these heady concerns, the book’s episodic structure and action-packed plot makes it a very entertaining read. I would also like to give special recognition to Dan Stiles for his wonderfully innovative and striking cover design, which magically drew my hand toward this book the moment I saw it sitting on the “Staff Picks” shelf at Chapters.
Posted by Phil at 16:20