Alice Munro's "Lives of Girls and Women" and the Pleasure of Faces, Places, and Traces 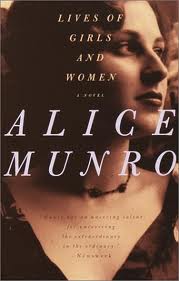 “My mother was not popular on the Flats Road. She spoke to people here in a voice not so friendly as she used in town, with severe courtesy and a somehow noticeable use of good grammar. To Mitch Plim’s wife—who had once worked, though I did not know it then, in Mrs. McQuade’s whorehouse—she did not speak at all. She was on the side of poor people everywhere, on the side of Negroes and Jews and Chinese and women, but she could not bear drunkenness, no, and she could not bear sexual looseness, dirty language, haphazard lives, contented ignorance; and so she had to exclude the Flats Road people from the really oppressed and deprived people, the real poor whom she still loved.”

Lives of Girls and Women is Alice Munro's only novel, although one could take issue with calling it a novel at all. It is really a cycle of short stories centering on Del Jordan, a witty and observant girl who comes of age in the fictional town of Jubilee, Ontario in the 1940s. Before moving inside the boundaries of Jubilee proper, Del spends her youngest years living at the end of the Flats Road on her father’s fox farm. Her mother, a frustrated intellectual, believes that human worth is founded on a person’s ability to question the institutions, norms, and assumptions into which she has been born. Del, however, deeply disappoints her mother when she develops a strong attraction to the mysteries of religion. Beginning from a point of childish naiveté, Del eventually enters adolescence and forms deepening relationships with people outside of her family. As this happens, she must cope with the confusion, excitement, and anxiety that accompany her budding social and sexual awareness.

Many online reviewers have written that Lives is a profoundly boring book until it deals explicitly with Del’s sexual curiosity. Cosmopolitan, for example, writes that in this book, “Alice Munro has put the sexually awakening female under glass as Salinger once did the male.” For the most part, I think that this sort of comment makes an apt and interesting point. But with respect to the reviewers who say that sexuality is the primary source of interest in this book, I think there is far more to appreciate in both Munro’s style and content. Her prose is exquisite, her construction of character nearly incomparable among North American writers. For an example of her genius in this regard, I direct your attention back to the passage with which I opened this post. I find little wonder in the fact that Jonathan Franzen has expressed such deep admiration for her work. That said, it is important to note that this book is very much interested in the Lives of Girls and Women. Munro’s male characters are often portrayed from an agnostic distance. This is not always the case, but when you stack Del’s mother and aunts up against her father and brother, you find that the latter are drawn in much sparser terms. I do not fault Munro for this, for by the time I finished reading this book, I was content to think that men were simply less interesting than women.

Munro, like Franzen after her, is brilliant at creating characters; but where she surpasses Franzen is in her ability to weave these characters into a fully fleshed-out and singular sense of place. We walk alongside Del as she travels from Flats Road to the grocery store in Jubilee. We lick our thumbs and bend to clean our shoes when the road coats them with dust. But most importantly, we become engrossed in the inner lives of the women Munro portrays. We sympathize with their faults and hope that they will overcome whatever mental roadblocks are making them unhappy and inhibiting their personal growth. To this extent, I think that Munro’s book warrants an emotional comparison to Middlemarch. Unlike Eliot, however, Munro does not conjure up a fictional world in order to manifest a godlike sympathy that is only possible inside the boundaries of a novel. Rather, Lives of Girls and Women strongly hints that Munro writes in order to preserve traces of people and places – gestures, habits, street names – from the eroding forces of time. As readers, we first receive this hint in an early chapter entitled “Heirs of the Living Body,” in which Del describes her Uncle Craig, who “[when] not working on the township’s business…was engaged on two projects—a history of Wawanash County, and a family tree.” A young Del, interested only in matters of glory and greatness, goes on to describe her uncle’s boring and futile obsession:

“[It] was daily life that mattered. Uncle Craig’s files and drawers were full of newspaper clippings, letters, containing descriptions of the weather, an account of a runaway horse, lists of those present at funerals, a great accumulation of the most ordinary facts, which it was his business to get in order. Everything had to go into his history, to make it the whole history of Wawanash County. He could not leave anything out. That was why, when he died, he had only got as far as 1909.”

By the time she matures into a young woman, however, Del has embarked on her own project of salvage historiography, writing a novel that she hopes will capture the people and places in Jubilee before time takes them away from her forever. Toward the end of the novel, she says of her own work:

“It did not occur to me then that one day I would be so greedy for Jubilee. Voracious and misguided as Uncle Craig out at Jenkin’s Bend, writing his History, I would want to write things down. I would try to make lists. A list of all the stores and businesses going up and down the main street and who owned them, a list of family names, names on the tombstones in the Cemetery and any inscriptions underneath… The hope of accuracy we bring to such tasks is crazy, heartbreaking.”

Although it falls into the dubious category of biographical criticism, I cannot follow this change in Del without imagining it to reflect Munro’s own desires in writing this book. Yet regardless of motive, Lives of Girls and Women is a beautiful work, not only for its wonderful tone, setting, and characters, but for the sympathy and patience it requires of readers before it will fully make its pleasure available. At this point, I can only quote Franzen in saying, “Read Munro!”
Posted by Phil at 14:13