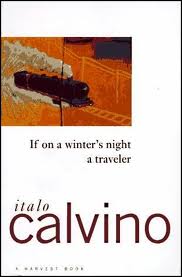 “You are about to begin reading Italo Calvino's new novel, If on a winter's night a traveler. Relax. Concentrate. Dispel every other thought. Let the world around you fade. Best to close the door; the TV is always on in the next room. Tell the others right away, "No, I don't want to watch TV!" Raise your voice--they won't hear you otherwise--"I'm reading! I don't want to be disturbed!" Maybe they haven't heard you, with all that racket; speak louder, yell; "I'm beginning to read Italo Calvino's new novel!" Or if you prefer, don't say anything; just hope they'll leave you alone.”

Italo Calvino’s If On a Winter’s Night A Traveler is, among many things, a polarizing book. Some people love it; some hate it. The former accuse the latter of not properly understanding the book’s merits; the latter accuse the former of being pedantic jerks. And so on…

Structurally, the book is a mixture of genre novel and extreme metanarrative. Put more simply, it is a book about reading books. It opens with the aforementioned lines, “You are about to begin reading Italo Calvino’s new novel, If On a Winter’s Night a Traveler. Relax. Concentrate. Dispel every other thought. Let the world around you fade.” When you first read this, you might think that you have stumbled onto a Translator’s Introduction. Yet there is something uncomfortably intimate about the speaker’s tone. It is only after flipping forward a few pages that you realize the book has begun, and that its protagonist is YOU, the reader! Its primary storyline unfolds from a second-person perspective, thus implicating “you” in the plot the way you might find in one of those old “Choose Your Own Adventure” novels. As you continue to read, you discover that a publishing error has ruined your copy of Calvino’s book, and replaced it with the opening chapter of another novel, Outside the Town of Malbork by a fictional author named Tazio Bazakbal. As a reader, you grow irritated, but now that you have become invested in Bazakbal’s story, you no longer care about Calvino and his missing novel. It is now Bazakbal’s book that you want to continue reading, and you set off on a quest to find a full, intact copy of it.

As the plot unfolds, you enter into a relationship with a mysterious woman named Lumilla, a fellow reader who is also desperate to find a copy of Tazio Bazakbal’s novel. Then you are constantly faced with books that profess to be the ones you wish to read, but all you manage to acquire are the opening chapters of ten different novels of varying style, genre, and subject matter. The overall effect of Calvino’s narrative is to stimulate your desire to the point of ecstasy, breaking off every one of these fictional novels at the very point you most desperately wish to know what happens next. To put it more bluntly, he brings you to the verge of narrative climax, only to withhold it and force you to start anew. Over and over again, your reading of each new story is interrupted, whether it be through the theft of your book, an author’s suicide, or your being arrested. And over and over again, you begin some new story with an incredibly evocative opening:

“The novel begins in a railway station, a locomotive huffs, steam from a piston covers the opening of the chapter, a cloud of smoke hides part of the first paragraph. In the odor of the station there is a passing whiff of station café odor. There is someone looking through the befogged class, he opens the glass door of the bar, everything is misty, inside, too, as if seen by nearsighted eyes, or eyes irritated by coal dust. The pages of the book are clouded like the windows of an old train, the cloud of smoke rests on the sentences. It is a rainy evening; the man enters the bar; he unbuttons his damp overcoat; a cloud of steam enfolds him; a whistle dies away along tracks that are glistening with rain, as far as the eye can see.”

It is very difficult to describe Calvino’s book without making the thing sound insufferably erudite and heavy-handed. But I truly believe that the book's primary effect is to remind us of how much pleasure we gain from reading. Calvino treats narrative pleasure like a muscle that exists inside each of us, and then uses his truncated stories to prick that muscle over and over again, causing it to swell until we can’t bear to do anything but read on! For anyone who has ever aspired to write a novel, the book provides additional titillation by only offering the opening chapters of ten different novels, each one more engrossing than the last. What aspiring writer has never written a perfect opening sentence, paragraph, or page of a novel, only to give up once the initial promise and enthusiasm of writing has faded? In If on a Winter’s Night, Italo Calvino traces a path through this impasse, and it is an incredibly pleasurable experience to follow him along it.

In short, Calvino’s book is experimental and sometimes verbose to a fault, but not in the service of any patently intellectual concerns. In fact, his book contains several passages that parody the eccentric academics who might try to impose thematic patterns onto books, thereby endangering the pleasure of being carried along blissfully by a well-told story. As a book about the pleasure of reading books, Calvino's succeeds wonderfully. You might not always enjoy the feeling of being cut off the moment you start enjoying a new novel, but the long-term payoff of this experience is well worth the read. To this end, If on a Winter’s Night a Traveler is a book to be enjoyed not only for its own sake, but for the enthusiasm that you will bring to all the stories you read after it.
Posted by Phil at 12:31