"The Big Lebowski" and Defining Death 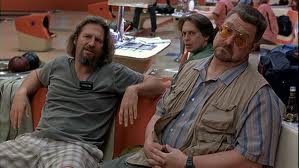 Recently, I sat over a pint with one of my closest friends at one of my favorite pubs. The chilliness of the air outside and the warmth of the pub's fireplace more or less made for an ideal evening. As my friend and I chatted over this and that, our conversation eventually turned to the Cohen Brothers' cult classic film, The Big Lebowski. It was only because the evening was so serene that I was able to reveal to my friend that, contrary to what I'd been pretending for the past ten years, I truly did not like this movie (sadly, I was one of those men on the street who'd always agreed that the emperor's clothes looked truly beautiful).  My friend argued that the movie was a work of genius, filled with classic scene after classic scene. I, however, argued that a film needed to be more than the sum of its parts, and that classic Goodman/Bridges exchanges or slow-motion shots of John Turturro weren't enough to make a movie good.

Finally, he countered with the undeniable fact that Lebowski is, plain and simple, an incredibly funny comedy. This might be the case, but there is something about the Cohen Brothers' comedies that has never done it for me. Whether it's Fargo, Burn After Reading, or yes, the irreproachable Lebowski, I can't help but feel that the laughter of these movies is nothing more than a Nietzschean cackle sent off into a random and godless universe. The amorality of the laughter in these movies is too close to Joseph Conrad's The Secret Agent for my liking, because in short, I believe that life is best spent trying to make the world mean something rather than embracing its supposed randomness.

The conversation carried on for some time after that, and eventually brought us to the subject of mortality. I asked, somewhat rhetorically, if my friend knew what death was. With a snort, he threw his hands up and said no one did. I had no real answer for this, but having had too many pints to stop talking, I pressed onward and asked him what year he'd been born. He answered 1984; so I told him that death - in his case - was 1983. Simply put, the world existed at that time and he didn't. The same goes for that moment in the future when he (or any of us) will die. The world will still be here, but we won't. It stands to reason that our attitude toward death should be the exact same as our attitude toward the year before we were born.

Death isn't anything we haven't experienced before. We get a very limited window of self-conscious existence between the bookends of non-existence, so I think our time is best spent following the credo of American poet Wallace Stevens, who once said that poetry (or art in general) was "a violence from within that protects us from a violence from without." The task of art is not to reveal the randomness and/or emptiness of the universe, but to wage an endless war against it - in short, to force it to be beautiful.

There is not a clear line of argument leading me from the Lebowski conversation to my meditation on death. But that's the great thing about blogs; you can just post anything that seems interesting to you, even if you don't really know what you're talking about.
Posted by Phil at 18:43